Simon Amstell/Matt Shultz I really tried to write slash, but it seemed to end up a little bit... sexless. Never-the-less, I enjoyed writing it.

Notes: After the recording of the second episode of the 22nd series of Never Mind The Buzzcocks, the guest Matt Shultz (from Cage the Elephant) asks Simon if he can crash on his couch, because his hotel effed up.

Simon froze. Sure, some people were pissed off after the show, but most of them were good sports. Although, this one was American. He slowly turned around and found himself standing face to face with Matt Shultz.

—Why didn’t you trash me on the show, man? I was expecting to go home in tears!

Matt laughed, showing his teeth. Only Americans have teeth that white. But then again, it did match the hair. Still reaking of bleach, Simon thought to himself.

—It’s not easy to come on the same show as Stephen Fry.

—No, the skinny jew admitted, he’s pretty hard to beat.

Simon began to feel as if this conversation was going nowhere, and he really wanted to get home to his cat. He’d grown quite fond of it lately, and even if he knew it was just a cat, he used to talk to it, tell it all the things he had done during the day. If it wasn’t too explicit, obviously, because then again Moses was just a kitten.

He really tried to sound polite, but he just didn’t have any reason to talk to this guy. The show was over, and the money had been paid. Couldn’t he just get to the point, if he had one, and leave? But Matt stood silent for a while, maybe waiting for Simon to compliment him back. When he understood that wasn’t going to happen, he changed his tactics.

—So, did you listen to the album?

What? When would he had time for that?

—What did you think?

Matt looked really excited to hear what Simon had to say about it, and it made him feel a bit guilty. Not enough to make him stay here longer than necessary, though.

—Look, Matt, I’d love to stay and chat, but I’m supposed to meet someone.

The American smiled even wider.

This was truly ridiculous. This guy was clearly not very intelligent, and Simon prefered to speak to people with similar IQ to his own, like Stephen Fry.

—Oh, come on, I watch british tv all the time! I’m aware of pretty much all of your celebrities! Well, the good ones, obviously.

Simon was beginning to get really annoyed. Suddenly a thought came to his mind: why did he have to be polite to this jerk? He would probably never see him again, and if it had been on the show he would have already torn him apart. Wasn’t that what he wanted, anyway?

Nice and simple. Even an American should understand. But Matt looked puzzled.

Simon was tempted to just turn around and walk away, pretend as if this had never happened. But this was getting interesting. The American was speechless, and that could be quite amusing.

—My hotel fucked up.

Now it was Simon’s turn to look puzzled.

—Well, I’m not in charge of that. You should go talk to…

—No, interrupted Matt, I mean… could I crash on your couch?

As they went up the stairs to Simon’s flat he tried to go through the series of events that lead to this, in his mind. Matt was talking about something, but he had no idea what it was, and he doubted that Matt even knew himself. As they reached the door and Matt finally shut up, Simon turned to him.

It seemed like a casual and normal thing to say, but it sounded weird. He might as well had said “I’ve got some crack” or “I like to grow plants in silly places”. Matt looked a bit excited, though.

—We had a cat growing up, he said, it was black and white. We used to feed it with all sorts of things.

—Christian up-bringing, Simon sighed inaudible as he opened the door.

Moses came running as usual. That was one of the things Simon loved about having a cat, unconditional love, no matter what time it was. He could come stumbling home at 2 am, and still find the cat waiting for him, purring for no particular reason. If Hitler had a cat… Simon realised he could not let this thought slip away, so he rushed into the kitchen, grabbed a pencil and started scribbling words onto a shopping list that was lying around. Matt came following with the cat in his arms.

—What are you doing?

—I got an idea for a joke, I had to write it down before I forgot it.

Matt tried to read over his shoulder.

Simon felt the irritation bubbling up. Why couldn’t he say no? He now remembered exactly why he hired a manager.

—The couch is in there, he said and pointed towards the living room, and there’s blankets and stuff in the cupboard.

Matt looked in the direction of the couch, but didn’t move. He just stood there, petting the cat.

The question lingered in the air. Simon didn’t know what to say, mostly because he didn’t know if Matt was kidding or not.

This angered Simon a bit, and he didn’t really understand why. He felt a bit humiliated.

—I don’t fancy every man I see just because I’m gay.

Matt shook his head in some kind of excuse.

—To be honest, Simon said harshly, you really annoy me, and I have no idea why I even let you come here. Now, either lay down on the couch and shut the fuck up, or leave.

Matt put the cat down on the floor.

Simon didn’t feel at all guilty in the morning. If anything, he should feel proud—he had managed not to throw the intense blondie out. Matt was still asleep when Simon had breakfast, but he avoided speaking to Moses anyway, something that the cat did not appriciate at all. At about 10 am, Simon went into the living room.

Matt groaned and turned around, now facing the back of the couch. Simon poked him in the side.

—Please get up from my couch.

He didn’t move, and Simon began to feel the anger again.

The American opened his eyes and sat up.

He looked up at Simon, standing there with his arms crossed over his chest, and his face shone up.

—Now I remember! Good morning! I think. What time is it?

Matt stretched for a bit, then stood up.

—Is it okay if I use your bathroom?

Simon nodded, and Matt left the room. Was this guy going to be one of those never leavers? He sure hoped not, he wanted to chill today, before he had to go back to work and write jokes about the industry he hated. He started putting the blanket back into the drawer as he heard Matt flush. Moses was lying on the couch where Matt’s feet had been a minute ago, so Simon stroke the furry little bugger over the head. He could hear Matt breathing behind him, but he had nothing to say, so he didn’t turn around.

—I was going to clean up after myself, said Matt, but it seems you’ve already done that.

Silence. Not really an awkward one, but it sure wasn’t comfortable.

—Do you want to hand out today?

Simon turned around, facing Matt, who had now put his glasses in his chest pocket. He had pretty nice eyes, Simon noticed.

—Only if you want to.

Simon turned back to Moses. He couldn’t stand Matt, but at the same time, he was kind of fascinating. No social skills what-so-ever, it seemed.

What? Why didn’t he say no? What the hell was going on?! Confusion struck Simon as he once again turned around to the blonde man standing behind him.

—Great! Matt said happily, you can show me all the cool places of London!

Simon’s hat was itchy. He didn’t like it at all, but his mom had made it for him, and if a paparazzo got a picture of him, walking around outside without wearing it, she would probably be upset. She used to google his name a few times a week, which worried him a bit. Who knew what these wack head “journalists” wrote about him? Not that they frequently did.

—Can we go to Camden?

Matt sounded an awful lot like a child dizzy on lemonade, but that seemed pretty fitting out here in the bright light of a February midday. The fresh air ever calmed Simons nerves down so much that he could actually stand being around Matt without gritting his teeth.

—Why do you want to go to Camden?

Simon shrugged and called out for a cab. Ten minutes later they were walking the streets of Camden. Matt stopped every four metres, staring in the store windows, seemingly amazed by the metrosexual clothes. After walking around aimlessly for about half an hour, almost in complete silecne except for Matts little “Wow!”s and “Oh!”s, Simon suggested they’d grab a coffee.

—Starbucks! yelled Matt and started walking a little faster towards the corner of the building they were just passing.

Suddenly, a weird thought flew into Simons mind. He didn’t even think it over, he just grabbed Matts arm and pulled him into an alley. The blondie didn’t struggle, he seemed to happy to be walking around in Camden to even notice what was going on. Simon pushed him up against the wall and kissed him. Matt kissed back and pulled Simons hat off so he could grab his hair, to make sure he wasn’t going to pull away. A strange taste of strawberry filled Simons mouth, and he remembered Matt had offered him a chewing gum of that flavour earlier. He had turned it down, but was rather enjoying it now. He could feel Matts hand working its way down to his pants, so he grabbed it, and stopped the kissing

—Back against the wall, mumbled Matt while whiping some saliva off his mouth.

Simon looked puzzled at him.

—It’s one of my songs. From the album you said you’d listened to?

Simon smiled and shook his head.

Matt frowned, looking almost like a stubborn teenager, and put his glasses back on.

On the way back to the flat, the tension was finally gone. They could even laugh at some old lady hesitatingly trying to cross the street outside the window. Moses was sitting at their feet, looking at them with big, yellow eyes.

—Why are these do damn cute? said Matt and picked up the cat.

—I don’t know, Simon replied, they don’t actually have a reason to, do they?

—Maybe we’d kill them if they were too ugly. They don’t ever do any good.

Simon smiled and scratched Moses behind the ear before he sat down on the couch. Matt followed his example.

—When are you going home to the states, then?

—Some time next week, I think.

Simon nodded and then they sat quietly for a moment. Matt moved a little closer.

—Do you want to kiss me again?

End Notes: Well, that was it. I really like this quite unusual pairing, but I don’t know what to do with it. Give me some feedback! 😀

Thanks to Black Jack aka Stygg aka Trollestygg for helping me when I was stuck. 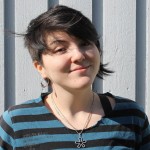